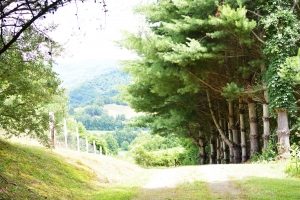 Diane Bryson and her husband Jim always talked about building houses with Habitat for Humanity during retirement. In 2009, the Ohio natives were putting all the pieces together for retirement in the mountains of North Carolina. They had found a beautiful mountain home in Sandy Mush, NC and even bought a fun, 2-seater sports car in anticipation of their post-work years together. However, the unexpected always seems to work its way into the best laid plans, and just a few months after Jim’s retirement in 2012, an illness claimed his life and Diane found herself starting over in a very unanticipated and heavyhearted way. 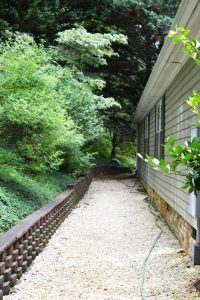 In addition to talking about volunteering with Habitat, Diane and Jim had also been planning a cruise to Alaska when he passed away. Diane didn’t hesitate to fulfill the plans she had made with her husband, and within a year she had taken her entire family to Alaska in his memory, and within 3 months she had walked onto her first build site to volunteer with Asheville Area Habitat for Humanity. She had no way of knowing where that one choice to honor her husband’s dreams would lead her, but now almost ten years later, she is a familiar and well-loved face on both the job site and in the ReStores. 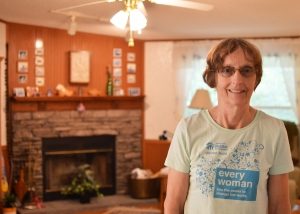 Dinae in her “Wombat” shirt, in her home.

Starting over in a new place after losing her husband of over 30 years, Diane remembers having a choice, “I could just roll over and wait and hope for people to come to me, or I could do something.”  She began volunteering 1-2 times per week at Asheville Habitat’s new home construction build sites, joined a hiking club, and traveled quite a bit. In 2013, just one year after she started volunteering, Diane became a “Wombat” and worked on her first Women Build House. She has since volunteered on all but a couple of the annual Women Build homes, in addition to her weekly jobsite volunteer shift.

In 2017, Diane began taking classes with UNCA’s Osher Lifelong Learning Institute (OLLI) and joined the Civic Engagement Committee, a group of lifelong learners who volunteer in areas of critical need in our community. She became part of the group who made monthly trips to the Asheville ReStore, working on whatever odd job was needed on the day of their visit. Through various pathways, Diane found herself volunteering with both sides of Asheville Area Habitat- new home construction and the ReStore. 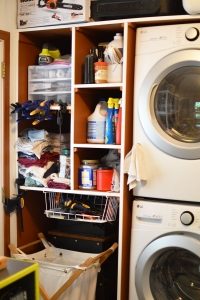 Of course Covid changed everything, and both jobsite volunteer shifts as well as monthly OLLI visits to the ReStore were cancelled. Missing her engagement with Asheville Habitat, Diane jumped on the opportunity to get involved again when she received an email requesting volunteers to help in the Asheville ReStore on Mondays when the store is closed to the public. Diane has been volunteering weekly with the ReStore for the last year with the same project-based mentality she had with the OLLI group. She not only has a keen eye to spot what needs to be done, she also has the skills to back it up from volunteering on the jobsite for so many years. “I love to work with wood and tools and do jobs that don’t require extreme precision.” 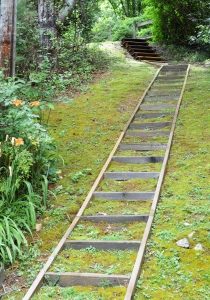 Outdoor stairs built into a moss hill by Diane

She has certainly found her place at the ReStore! Just some of the jobs she has completed over the past year include, with the help of other OLLI members, building two new sets of loading dock stairs for the truck drivers, designing and building a display for the new flooring products, building a rug display shelf for the Weaverville ReStore, building an A-frame holder for countertops, hanging two peg board walls for additional art wall space, and, when there is space in the ReStore, assembling beds for display and sale. Diane has in fact become such a ReStore devotee that she makes a point of visiting other ReStores on her travels. After visiting the ReStore in Santa Fe, NM where she noticed they use dresser drawers to organize the particularly unruly hardware section, she came back and implemented the same kind of organization in the Asheville ReStore. These kinds of projects have been incredibly helpful because once Diane completes these foundational projects, it’s easy for someone else to maintain the areas she has improved. 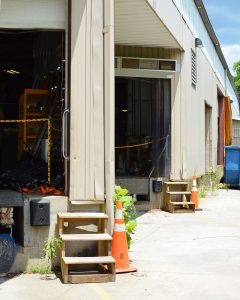 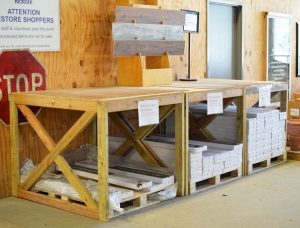 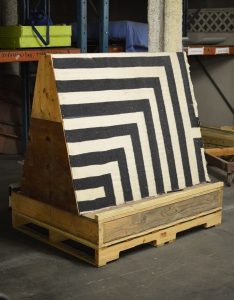 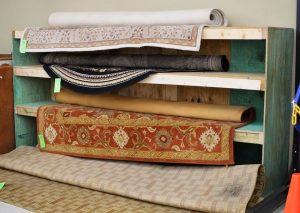 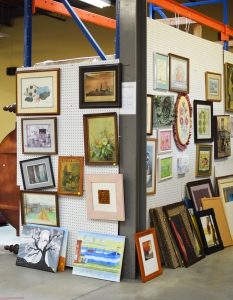 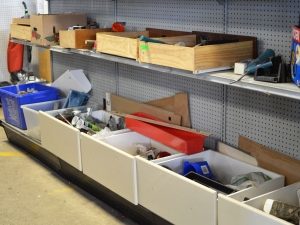 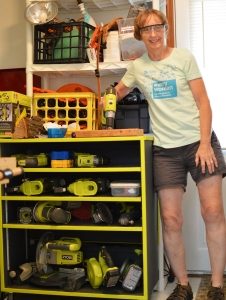 Diane with her power tools and matching DIY cart.

Her intentionality with projects extends throughout her home as well. She has single-handedly upgraded her bathroom, as well as transformed a furnace closet into a very functional utility room with a sink and storage. She also custom-built an expanded storage area in her laundry room and set up her own outdoor workspace where she is currently refinishing a set of ReStore- purchased cabinets flor the walls of her laundry room.  Talk about handy! 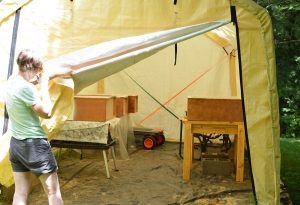 Diane’s life offers much food for thought. She has seen her share of disappointments and just as many decisions about how to respond to them. Unerringly, she has always chosen the route of connection and giving back to others in her response to disappointment, which is perhaps why volunteering with Asheville Habitat is such a good fit. Bringing people together to build homes, communities and hope – not only for those who purchase Habitat homes, but also for those coming together to build.

Thank you for your service Diane!!

If you are interested in volunteering with Asheville Habitat, we’d love to hear from you, and get you engaged in a meaningful way.

For volunteer opportunities with the ReStore, contact Carrie at cburgin@ashevillehabitat.org.